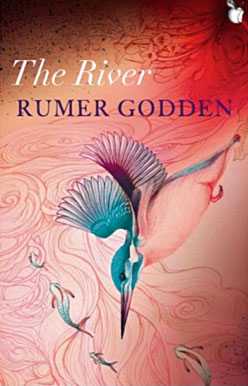 New hardback edition of The River

The River is to feature in a new range of hardbacks.
It is part of the new VMC Coming Of Age Collection and will be published by Virago Modern Classics as part of the VMC set for adult and young adult readers on 2nd August 2012 price £12.99.

‘You can’t stop days or rivers . . . ‘
Harriet’s older sister is no longer a playmate, her brother is still a little boy. And the comforting rhythm of her Indian childhood – the noise from the jute works, the colourful festivals that accompany each season and the eternal ebb and flow of the river on its journey to the Bay of Bengal – is about to be shattered by a tragic event. Intense, vivid and with a dark undertow, The River is Rumer Godden’s compelling portrait of three siblings on the cusp of adulthood.

Virago say this range of hardbacks will be “much admired and coveted by booksellers and readers as previous VMC hardback series have been”.

Virago Modern Classics will publish 10 Rumer Godden titles in paperback beginning in 2013-14, including the much-acclaimed Black Narcissus, Kingfishers Catch Fire and Breakfast with the Nikolides.