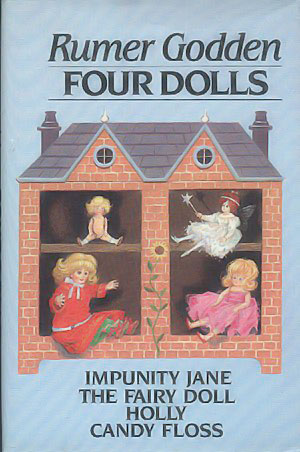 Impunity Jane was a pocket doll. She hated living sedately in a doll’s house, and when Gideon took her off adventuring with Joe and his gang she was blissfully happy and lived in Gideon’s pocket, with all kinds of interesting objects and the snail Ann Rushout.

But Impunity Jane didn’t belong to Gideon. What would happen if ever he had to give her back to the little girl whose doll she really was?

The Fairy Doll had been with the family for a very long time. I Elizabeth, the youngest child, who was always in trouble. She was untidy, late and she couldn’t ride a bicycle.

The other children teased and ignored her. But with the Fairy Doll to help, she found that gradually she could do all these things, and more. Could it be magic?

Holly was a doll, and Ivy was a little girl. Their story is about wishing – for Holly wished very much that she could be a Christmas present, and leave the toyshop where Abracadabra the owl frightened her, and Ivy wished for a grandmother who would give her a real home. How could these wishes come true?

Candy Floss belonged to Jack who had a fairground coconut shy. She loved her life, and her friends – Jack himself, Nuts the dog and Cocoa the horse.

Then came the day when rich, spoiled Clementina stole Candy Floss. What could the poor doll do?

Four beautiful stories, brought together in book by a superb storyteller.